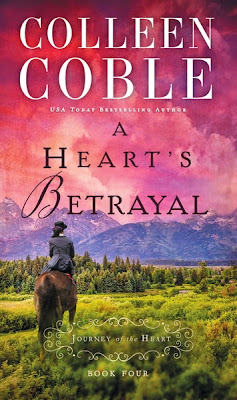 Part 4 of 6 in the Journey of the Heart series ~
E. B. Taylor had attempted to negotiate a constructive peace treaty in May of 1866, but Red Cloud had angrily stomped out when Colonel Carrington showed up to establish three new forts in the last of the Sioux hunting grounds. Red Cloud objected that the army would be setting up forts without waiting for the agreement from the Indians to allow troops to patrol the Boseman Trail.
--author Colleen Coble, A Heart's Betrayal, 61

My review:
This six-part novella series is a reissue of the Wyoming series, earlier works by Colleen Coble ~ Where Leads the Heart and continuing Plains of Promise, to be enjoyed by new readers and renewed by those who read them when they were first published almost a decade ago. The story continues in August of 1866, as Emmie Croftner realizes a broken dream. She travels west from Wabash, Indiana, to join her friend Sarah Montgomery Campbell at Fort Laramie, Wyoming. Shortly after arriving, the Campbells are transferred to Fort Phil Kearny, Wyoming, and Emmie finds herself uprooted again.

Fort Phil Kearny, from a drawing by Buglar Nicolai, June 23, 1867, with friendly Crow Indians  camped near the fort and sentries stationed at intervals to protect them. Hostile Indians are barely visible on the skyline.  The huge garrison flag is close to actual scale. Source

Rand Campbell's friend, Isaac Liddle, is a scout for the wagon train on the way between the two forts. I am concerned for Emmie, trying to make changes, as she asks them to linger an additional day to rest. Along the river they are ambushed by members of a Sioux warring party.


No soldier in active service entangles himself in the affairs of everyday life, so that he may please the one who enlisted him as a soldier. --II Timothy 2:4

It is difficult for Sarah, who had lived with the Sioux for a short while and was befriended by White Dove, now with Little Wolverine in Red Cloud's resistance. What would happen if Rand had to fight his friend, Little Wolverine? They hope they never have to find out.

Without telegraph access, there was no way to alert for housing and they are led to temporary tents until their quarters are built. Sarah is looking forward to being with her brother, Jacob, and his wife, Amelia, again. Will Emmie find she is misplaced, or just where she is meant to be? (to be continued in next month's issue...)

***Thank you to Litfuse Publicity Group for inviting me to join the blog tours for the Journey of the Heart series by Colleen Coble, and to Thomas Nelson Publishers for sending me a copy of Book Four, A Heart's Betrayal for review. This review was written in my own words. No other compensation was received.***

Emmie finds shelter in the arms of a soldier in Fort Laramie, Wyoming, but will her big secret drive them apart? Find out in book four, A Heart's Betrayal, of Colleen Coble's A Journey of the Heart series. Suddenly displaced, powerless, and ashamed, Emmie can’t stay in Wabash, Indiana. She makes a hopeful start for Fort Laramie to find her friend Sarah Montgomery and a new beginning. But when she arrives, she discovers she’s pregnant—and without a husband. The new start she’d hoped for slips from her fingers.

Melt into summer with a new giveaway from Colleen: four books (books one–four in Colleen's A Journey of the Heart series) and a box of chocolates to pair with your new books!

One grand prize winner will receive:
Enter today by clicking the icon below. But hurry, the giveaway ends on June 30th. Winner will be announced July 1st on Colleen's website.