Where Treasure Hides by Johnnie Alexander, © 2013 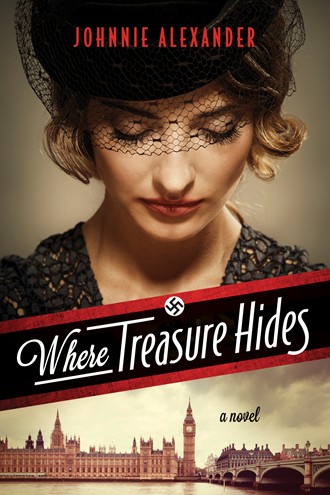 She felt a kinship with the embroiderer, the mysterious need to preserve a slice of time before it flowed into the mists of memory.
"I had to capture the moment."
--Where Treasure Hides, 13

August 1939 ~ London, England
A strain of music drew her as she waited at the train station ~ "Rule, Britannia!" and the holder of the violin not more than seven or eight, played with his heartstrings for all to hear and believe. That Alison Schuyler should be there at the exact same moment Lieutenant Ian Devlin was watching out for young Josef Talbert, Kindertransport identity label 127. Boarding his train, Alison notices she has missed her connection ... and her heart that day, as Lt. Devlin invites her to tea and memories. He was a soldier on the eve of war. A chance meeting at Waterloo Station....

I have just finished reading Chapter Four and tears cover my eyes, hating for them to part. Especially, with her parting thoughts through the window of the train:

As her train continues down the track, I cherish the few moments they have had together.

"We'll Meet Again" is a 1939 song made famous by British singer Vera Lynn with music and lyrics written by Ross Parker and Hughie Charles. The song is one of the most famous songs of the Second World War era, and resonated with soldiers going off to fight and their families and sweethearts. The assertion that "we'll meet again" is optimistic, as many soldiers did not survive to see their loved ones again. Indeed, the meeting place at some unspecified time in the future would have been seen by many who lost loved ones to be heaven.

Can a day change your life? Ian Devlin hopes it is so. An image to take to war with him with hopes that they will indeed meet again.

This is a story of the hiding of the irreplaceable art of the Masters. Alison lives with her grandfather in Holland where he owns an art gallery. Believing that anyone who touches their family comes to ruin, she tries to guard her heart against the memory of Ian. When England declares war on Germany, Ian is recalled to duty.

Johnnie Alexander has visibly taken us through the throngs of war during this time period in history. I would like to see a continued story beyond Where Treasure Hides by this author. Very deftly written, you will follow the characters amid every turn in their unknown days to come.

***Thank you to Tyndale House Publishers for sending me a copy of Where Treasure Hides for review. This review was written in my own words. No other compensation was received.***

Enjoy this excerpt of Where Treasure Hides ~ Chapter One

The thick envelope, made from high-quality paper, had been sealed with gold wax and embossed with two Ms entwined in a scripted design. Alison guessed that the stationery inside would be of similar color and quality. The commanding officer was evidently a man of good breeding and taste. She turned the envelope over and read the broad black strokes written on its face: To My Darling Trish.
“His girlfriend?”
“His wife,” Ian whispered with a furtive glance around them.
Alison played along. “Your commanding officer must think quite highly of you to trust you with such an important mission.”
He slipped the envelope back into his pocket with a slight shrug of his shoulders. “He knows I wouldn’t pass through London without seeing Trish.”
“Oh?” A slight tremor in the simple syllable betrayed her interest.
“I loved her first, you see.”
A thousand questions raced through her mind. But it didn’t matter. After today, she would never see him again. His past didn’t matter. Whom he loved didn’t matter.
Aware that the man who had unwittingly, almost negligently, captured her heart couldn’t seem to take his eyes off her, Alison found one safe response. “But she chose him instead.”
Realizing her failure to achieve just the right amount of nonchalance and pity, she tried again and found herself asking the very question she wanted to avoid. “Did she break your heart?”
Again, Ian leaned forward as if divulging a great secret, and Alison bent her head toward his so as not to miss a word. “Something so personal shouldn’t be discussed in the midst of Waterloo Station. But there’s a little place near the Westminster Bridge that serves the most delicious cherry scones you’ll ever eat.”
“You mean Minivers?”
“You know it?”
“My father took me there for my sixteenth birthday. He ordered a cherry scone for each of us and stuck a pink candle in mine. Then he sang ‘Happy Birthday’ to me.” She remembered closing her eyes before she blew out the candle and wishing that every birthday, every holiday, could be spent with her father. That he and her grandfather would make up their quarrels so that she no longer had to choose between them. But she had hugged the futile wish to herself, telling it to no one, and laughed at her father’s clumsiness with the dainty teacups and miniature pastries. The cheerful memory felt as perfect, yet fragile, as the pristine white linens and delicate china that graced Minivers’ cozy tables.
“He felt awkward there, I think. It’s not exactly a gentleman’s place of choice, is it?”
“The scones are worth a bit of discomfort.”
“What about your secret mission?”
His eyes twinkled. “Trish isn’t expecting me, so she won’t know if I'm late.”
The corners of Alison’s mouth twitched and she turned from Ian’s hopeful smile toward the entrance of the station. She couldn’t see the telegram office from where she stood, but it was there, looming before her like a scolding parent. Missing the train had been foolish, but spending the rest of the afternoon with Ian was sheer stupidity. He was a soldier on the eve of war. That was reason enough to guard against any romantic entanglements.
But worse, she was a Schuyler. He couldn’t know how his warm hazel eyes affected her, how drawn she was to his confident demeanor and gallant charm. Or the sting of jealous curiosity she endured when he spoke of this other woman. Though she felt his mutual attraction, it was better that he never know that he already held her heart in his hands. The Van Schuyler fate may have destined him to linger forever within her, but she could still make her own decisions.
She squared her shoulders and faced him.
His smile charmed her as he offered his arm in a boyish gesture. “Shall we?”
Alison hesitated, then tucked her hand within the crook of his elbow. “I should exchange my ticket first.”