With Every Letter by Sarah Sundin, c2012

At Last Lyrics by Etta James
At last, my love has come along
My lonely days are over
And life is like a song
Oh, yeah, at last
The skies above are blue
My heart was wrapped up in clovers
The night I looked at you
I found a dream that I could speak to
A dream that I can call my own
I found a thrill to rest my cheek to
A thrill that I have never known
Oh, yeah when you smile, you smile
Oh, and then the spell was cast
And here we are in heaven
For you are mine
At last

Page 1 ~*~ With Every Letter by Sarah Sundin

Lt. Philomela Blake believed mornings should start gently, with the nighttime melting into golden sunshine and birdsong luring to wakefulness.
Most nurses on the morning shift assaulted the patients with electric light and harsh voices, but not Mellie.
She pulled the cord of the blackout curtain and sang "At Last," and the volume of her tune built with the intensity of light. Hurting and healing men deserved a soft hand.
On the nearest bed, Corporal Sloan shifted under the blankets. He'd undergone an appendectomy late last night. "Any dame ..." He cleared his throat, his voice raspy from the ether. "Any dame with the voice of an angel must have a face to match."
Mellie's song and her hands stilled. How many soldiers dreamed of a beautiful nurse who might fall in love with them?
He rubbed his eyes, looked at her, and his smile flickered.
Papa called Mellie his exotic orchid, but American men seemed to prefer roses.

And so opens With Every Letter as our leading lady protagonist, Lieutenant Mellie Blake, begins her soft morning awakenings at Walter Reed General Hospital with soft sunlight and a tune, gently to wakefulness. Ether was the common choice of inhalant anesthetics to induce unconsciousness for general surgeries. I was the recipient of it as a child for a surgery and can still remember the awful nauseating sweet-smelling odor all its own placed over my nose, "count to 10," and the hallucinating nightmare and respiratory tract soreness it caused. Thankfully, other intravenous administration ingredients are used today!

Mellie is asked to join a letter-writing campaign to officers in an Engineer Aviation Battalion unit headed by the chief nurse's husband based in Liverpool, England. One letter? Anonymously written; no photos, no life-long assignment. One Letter. Having been the only child on her Papa's botanical expeditions, shy Mellie has not had friendships beyond her scrapbook cutouts of magazine and catalog "children," and added newspaper photographs of children she has been praying for. One letter to ease his fears, his worries, his loneliness? She could write one letter. A friend. A friend on paper.

Enter, Tom, Lt. Thomas MacGilliver Jr., who has had to live down his father's name that follows him everywhere. He retrieves Mellie's letter, tossed by a platoon commander who mocked her first paragraph in front of everyone. [I like her letter!!]  ~*~ Tom agrees. He likes it too!

Mellie is transferred to Bowman Field, an Army Air Force base in Kentucky, to be trained for air evacuation as a flight nurse. She has been hoping to join this group to be nearer to her father. No news had come about his whereabouts in the Philippines. 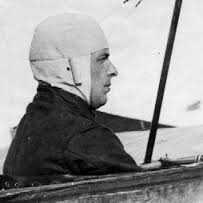 Back Cover
THEY KNOW EVERYTHING ABOUT EACH OTHER--EXCEPT THEIR REAL NAMES
Lt. Mellie Blake is looking forward to beginning her training as a flight nurse. She is not looking forward to writing a letter to a man she's never met--even if it is anonymous and part of a morale-buildilng program. Lt. Tom MacGilliver, an officer stationed in North Africa, welcomes the idea of an anonymous correspondence--he's been trying to escape his infamous name for years.
As their letters crisscross the Atlantic, Tom and Mellie develop a unique friendship despite not knowing the other's true identity. When both are transferred to Algeria, the two are poised to meet face-to-face for the first time. Will they overcome their fears and reveal who they are, or will their future be held hostage by their pasts?
Combining a flair for romance with excellent research and attention to detail, Sarah Sundin vividly brings to life the perilous challenges of WWII aviation, nursing--and true love.

Thank you to Baker Publishing Group for this copy of With Every Letter in exchange for my review in my own words.

One more thing! You don't want to miss this!! 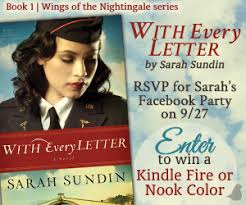 Other Historical Fiction by Sarah Sundin: Wings of Glory series, a three-book series of historical romances, follows the three Novak brothers, B-17 bomber pilots with the US Eighth Air Force in World War II.:

A Distant Melody: (book 1) available from Revell at your local bookstore or on-line at Amazon, Christianbook.com, or Barnes and Noble.
Allie Miller is promised to a man she doesn’t love, but Lt. Walter Novak, a furloughed B-17 bomber pilot, captures her heart. Will she honor her family’s wishes or take a chance on true love?

A Memory Between Us (book 2) available from Revell at your local bookstore or on-line at Amazon, Christianbook.com, or Barnes & Noble. Maj. Jack Novak has never failed to meet a challenge until he meets Lt. Ruth Doherty, a striking nurse with a shameful secret. Can Jack break down her defenses? Or are they destined to go their separate ways?
2011 Finalist in the Inspirational Reader’s Choice Awards
On Booklist's 2010 Top 10 Inspirational Fiction List

Blue Skies Tomorrow (book 3): available from Revell at your local bookstore or on-line at Amazon, Christianbook.com, or Barnes & Noble.
Young widow Helen Carlisle buries her pain in volunteer work, but the sparks of her romance with Lt. Raymond Novak fling them both into peril. Can they find the courage they need to face their trials?