Patrick E. Craig is a lifelong writer and musician who left a successful songwriting and performance career in the music industry to follow Christ in 1984. He spent the next 26 years as a worship leader, seminar speaker, and pastor in churches, and at retreats, seminars and conferences all across the western United States. After ministering for a number of years in music and worship to a circuit of small churches, he is now concentrating on writing and publishing both fiction and non-fiction books. Patrick and his wife Judy make their home in northern California and are the parents of two adult children and have five grandchildren. 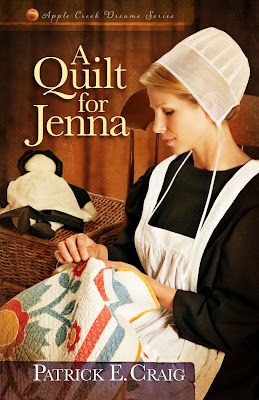 Amish + Quilts = readers delight! And in this first book in Patrick Craig’s Apple Creek Dreams series, readers will follow master quilter Jerusha Springer’s journey out of tragic circumstances to a new life of hope. A beautiful story of loss…and redemption.

I was drawn to this book by the word QUILT. As a quilter, two-thirds of one quilt is put together, and two other quilts in the planning. I have the kitchen table full with my sewing machine and fabric pieces, finishing up a January block. Friends and I are making a monthly memory block/s of our 2013 activities together, we will then each make into a quilt.

A second reason for wanting to read A Quilt for Jenna, is my husband and I went to Dalton, Wisconsin, one evening at dusk, after a rain, and heard the clip clop of hooves on the pavement, in this far rural community. This story is set near Dalton, Ohio, but it brings back memories of our travel to the other Dalton.

I, too, have lost a child. My firstborn and only son. He died a year and a half ago of a heart attack in the night. Being an adult, perhaps with memories of his life, it would differ from Jerusha losing her young child. The Lord has covered me. As I read, I want Jerusha to allow Him to do that for her too.


A man's heart plans his way: but the LORD directs his steps.
--Proverbs 16:9

Jerusha Springer has finished her Rose of Sharon quilt in her daughter's memory, and is now on the way to take it to Dalton to enter it in the Quilt Fair. The neighbor boy is going to his Grandma's for Thanksgiving dinner and Jerusha rides with him. She desires to place first and leave everything behind with her prize money. But everything cannot be left behind; not memories, not desires, not cares. We live in this world. We so desperately need the Lord to guide us.

Come and read Jerusha's story from a young girl to her present. So much transpires to make us who we are. Others depend on us. Do we allow love to live?