The Courier of Caswell Hall by Melanie Dobson, ©2013

nearby Shirley Plantation on the James River
My father built Caswell Hall years ago. I am his oldest daughter, Lydia. The war has separated families and neighbors. It is uncertain who is on what side. I overheard my father saying to mother that I am to marry a stranger. It has been five years since Seth Hammond and I have been promised to each other. Seth is no longer on the Loyalist side, and father has forbid me from marrying him. We no longer host guests at formal dinners and balls at Caswell Hall. Four years ago, my grandfather, a member of the House of Burgesses, was tarred and feathered and left upon our doorstep dead. My brother, Grayson, is off in the war too, with the Continental Army. It has been years since we have heard of him. My younger sister, Hannah, and I are at home. Will it never end! I flee the house to walk along the river after hearing my father's proclamation. I cannot marry a stranger, even if he is subject to the Crown.

I come upon a man moaning beneath the willows at the water's edge with his legs still in the water and his clothes soaked. I cover him with my cloak and manage to drag him clear. I seek help from Elisha, our head groom at the stable, and Prudence, who has stayed with us since she was our nursemaid as children. Elisha takes him to his own room above the coach house, but says there is little hope he will survive the night.
Nathan, his name is Nathan, becomes stronger and closer to the time he will leave. He tells me he is a Patriot. Father has invited a British officer to dinner. This is the stranger Father had patterned for me? Our families knew each other when we were younger, but I hardly remember him, certainly not to marry. Major Reed brings his staff, as well. He tells Mother he needs lodging for six ~ there are at least twenty out on the lawn. Fortunately, Nathan is able to leave under guise of being a servant. I want peace to be maintained again. Not one side against the other, never knowing who is trustworthy and the stand they take. Major Reed sees himself as more than a dinner guest. He is comfortable in a longer stay.

Intricately written, The Courier of  Caswell Hall weaves those known by each other into a fine tunnel of espionage so closely connected yet far apart. The intrigue heightens as Hannah is determined to find out the secret Lydia has been hiding. She is a danger to her whole household as she manipulates and leaks out information. How Lydia longs for the days before the war when she and her friend, Sarah, at the neighboring Hammond Plantation, spent time together dreaming of Sarah and Grayson at Caswell Hall and Lydia and Seth at Hammond Plantation with their children free to visit between the two estates. But it is merely a dream now. The price of freedom isn't free.

The Courier of Caswell Hall is part of the American Tapestries series.

An unlikely spy discovers freedom and love in the midst of the American Revolution.

As the British and Continental armies wage war in 1781, the daughter of a wealthy Virginia plantation owner feels conflict raging in her own heart. Lydia Caswell comes from a family of staunch Loyalists, but she cares only about peace. Her friend Sarah Hammond, however, longs to join the fight. Both women’s families have already been divided by a costly war that sets father against son and neighbor against neighbor; a war that makes it impossible to guess who can be trusted.

One snowy night Lydia discovers a wounded man on the riverbank near Caswell Hall, and her decision to save him will change her life. Nathan introduces her to a secret network of spies, couriers, disguises, and coded messages—a network that may be the Patriots’ only hope for winning the war. When British officers take over Caswell Hall and wreak havoc on neighboring plantations, Lydia will have to choose between loyalty and freedom; between her family’s protection and her own heart’s desires.

As both armies gather near Williamsburg for a pivotal battle, both Lydia and Sarah must decide how high a price they are willing to pay to help the men they love.

~*~
My next novel is Château of Secrets. It’s the story of a young noble woman who hides members of the French resistance under her family’s medieval château during World War II and the contemporary story of her granddaughter who returns to France to unravel the secrets of her family’s past.
--author Melanie Dobson 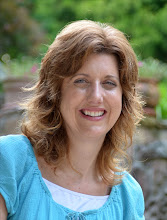 Melanie Dobson is the author of twelve novels; her writing has received numerous accolades including two Carol Awards. Melanie worked in public relations for fifteen years before she began writing fiction full-time. Born and raised in the Midwest, she now resides with her husband and two daughters in Oregon. Find out more about Melanie at melaniedobson.com.

***Thank you to Litfuse Publicity Group for sending me a review copy of The Courier of Caswell Hall by Melanie Dobson for this blog tour. This review was written in my own words. No other compensation was received.***

Melanie Dobson's latest release, The Courier of Caswell Hall, is a riveting story you won't want to miss. The newest offering in the American Tapestries™ series, it follows an unlikely spy who discovers freedom and love in the midst of the American Revolution.

Five winners will receive:
Enter today by clicking one of the icons below. But hurry, the giveaway ends on October 5th. All winners will be announced October 7th at the Litfuse blog.

Don't miss a moment of the fun; enter today and be sure to visit the Litfuse blog on the 7th to see if you won one of the books!