For Love or Loyalty ~ The MacGregor Legacy series, Book 1 by Jennifer Hudson Taylor, ©2013


One conquest could destroy her, but avenge his family.
Scotland to Carolina, 1760 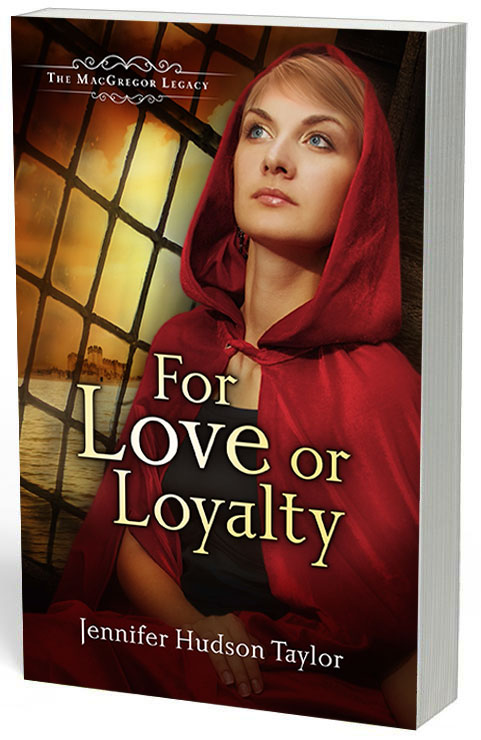 I know the thoughts that I think toward you, says the LORD, thoughts of peace and not of evil, to give you a future and a hope. ―Jeremiah 29:11

The Scottish Highlanders, 1760
Inverawe―home. Smoke swirls in the sky as Malcolm MacGregor and his brother, Thomas, reach the village. The Campbell men have come and burned their home and taken their mither and sister. Their father had been killed in the Jacobite rebellion fifteen years earlier. Duncan Campbell and his son, Scott, came with warriors ~ to collect the unpaid rents from the MacGregors' on his huts. Returning from selling the cattle at market to pay the rents, the Campbells have come a day early. They have taken Iona and Carleen MacGregor, possibly to a debtors' prison, as a warning to the rest of the village. The rents have been raised again, this time with interest ~ "legal robbery." They beat their youngest brother, Graham while trying to protect their mither and sister, and murdered his best friend. For two centuries, the Campbells have tried to wipe out the MacGregor Clansmen. Left in poverty, their furniture has been taken or left to burn before the huts.

Duncan Campbell's eldest daughter, Lauren, sets out to the Kilchurn Manor stables to ride to the ancient relic of Kilchurn Castle with her younger sister, Blair, to enjoy a day of picnicking together on their estate. The castle had passed to the Campbells through marriage. The lands were taken from the MacGregors when King James abolished their clan name generations earlier.

She has been intercepted.


"Malcolm! Thomas!" Lauren's captor ignored them and banged on the worn wooden door. "Open up. I have Lauren Campbell."
The door swung open and Malcolm's tall form emerged. He crossed his arms with a menacing scowl. "Colin, ye were supposed to find my mither an' sister, not bring back a hostage."
--For Love or Loyalty, 18

With Lauren saying she knew her brother and father were collecting rents and then going to the harbor, she and Malcolm are on the way ~ to the colonies, should they not intercept the Campbells at the docks.

This is so beautiful. Approaching Taynuilt, the description is so vivid!


Smoke from chimneys filled the air along with the aroma of mixed spices as they passed various cottages of all shapes and sizes. The sounds of a few rolling carts and carriages passed both directions. Most people had gone inside, but some lingered in the streets. It wasn't a large town, and before long the pleasant aromas and sights gave way to less pleasant odors and lurking shadows.
--Ibid., 29

They reach the dock to check ship rosters for the two women. Given a ship roster from an elderly man, he says his son set sail that morn, The Loyal Adventure, for Charles Towne, South Carolina. Lauren sees her friends' names near the bottom ~ MacGregor. The women had long been sharing their faith together when Lauren came to visit the poor and bring food in her generosity to the villagers. Without a paid fare, his mother, Iona, and sister, Carleen, are now indentured servants to the captain to be sold in Carolina when they arrive. Malcolm asks of another ship going there. The next morn, The Sea Lady is set to sail there just after sunrise.

Lauren has been given things, and not parental love. As the oldest, Malcolm has been the family protector. He is taking her to exchange for his indentured family member, but will it be enough to keep generational feuds going? Reaching America brings other difficulties they would not have expected. For love or loyalty? You will enjoy this story of hope, caring and forgiveness that can change a heart.

***Thank you to author Jennifer Hudson Taylor and Upon the Rock Publicist for sending me this first novel in The MacGregor Legacy series, For Love or Loyalty. This review was written in my own words. No other compensation was received.***
Posted by Lane Hill House at 12:03 AM