To Die For: A Novel of Anne Boleyn ~ Book 1 in the Ladies in Waiting series by Sandra Byrd, ©2011

Author Sandra Byrd has written a very thorough account of the Tudor period under the rule of King Henry VIII through the eyes of Anne Boleyn's trusted and truest friend, Anne (Meg) Wyatt, her childhood companion and wardrobe mistress at Court.

I liked the first person telling as only a dear friend can; one who is an honest and forthright teller of day-to-day happenings and conversations. Historical fiction is my very favorite genre. Are we to repeat history or reclaim what is rightfully ours? A choice to be made, for sure.

In this telling of Anne Boleyn, I liked Meg and her character very much. She rose above a mistreated home life to become very valuable in following a calling she believed was hers. In putting her life solely for the betterment of her friend, in servitude, she gained a worthy stand above reproach. Trust and fidelity brought her a remarkable outcome.

Notice the necklace on the cover of this novel! Anne Boleyn, whether innocently or contrived became entangled in the life of Henry VIII, a villain in his own right ~ possibly starting out with good intent but becoming ensnared in his own deceit and power. During this time, the Tyndale New Testament of the Bible was being printed in English. Secret meetings during the English Reformation were attended not only by those in agreement, but by those wishing to stand by the king and his rulings. Anne sought to set in power those with alliance to the reform; Henry wanted to affirm his sovereignty. He passed acts beneficial to himself. Seeking a male heir, he found ways to dismiss his wives.

Included are listings of Family Trees showing their connection to each other within the story; author notes, research sources, reading group guide, and author Q&A.

***Thank you to author Sandra Byrd for this copy of To Die For: A Novel of Anne Boleyn and the insight of the Tudor period. This review was written in my own words. No other compensation was received.***


There are many ways to arrive at the Tower of London though there are few ways out. Kings and Queens ride in before a coronation, retinue trailing like a train of ermine. Prisoners, however, arrive on foot, shoved through one cavernous gate or another by the wardens who live, as all do, at the mercy of a merciless king. Some unfortunate few are delivered to the Tower by water. The Thames lapped against our boat as it stopped to allow for the entry to be raised. 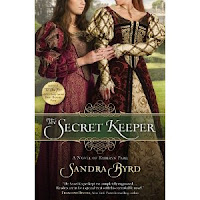 
Enjoy this excerpt from To Die For ~ Chapter One

ONE
Year of Our Lord 1518
Allington Castle, Kent, England