Where God Finds You: 40 Devotions Bringing Bible Characters to Life by Anita Higman, © 2012

Through reflection on Scripture and prayer, my hope is that you'll discover a place in each of these lives of vulnerability, tenderness, truth, and love––a place where you can find God ... and where God finds you.
--Anita Higman 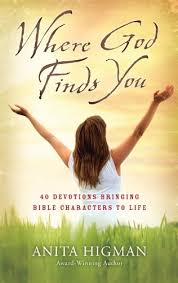 For the word of God is alive and active.
Hebrews 4:12

Join Anita as she brings these Biblical characters to life, entering them in our every day lives with their foibles, choices, and yearnings for something more. Beyond stories, they were real, as real as we are in our day and generations. Glean from them, plans and ideas that are expanded when given to God to lead and direct. So much simpler than having no path!

You will smile at some and cheer for others ~ wishing they would make a choice to what is open to them, the decision that will bring them so close they can feel His breath, His very presence. Awe and awareness, lovingly given. God is with us; He has promised to never leave us, nor forsake us. This is for all of us, in our every day lives, to bring us to the very heart of God.

Even Zacchaeus, my very favorite ~ he wanted to see who Jesus was... (Luke 19:3) and to have ~ a pure heart. His name means "pure." You will visit many ~ Leah, Paul, Hagar, Martha, Eve, Thomas, Elizabeth, Hosea, Steven, Simeon ~ and desire to seek God speaking to your own heart (Jeremiah 29:13).


Your people will be my people
and your God my God.
Ruth 1:16

I know the weight of death—the way its serpentine burden coils around one’s being. My husband’s fever had overtaken him so quickly, so dreadfully. Once we laid his body in the dusty ground, I became a part of the desert with him, dried up with no spring to feed it, thirsty and without hope. The remains of my beloved family mark the land but for a short time, but the grief will stain my spirit forever.
Life begins at birth, and the years meander like a stream. But at times, it dries up too soon—before the water can flow down the hillsides and wander through the valleys, to water the land and bring new life to the earth. So it was with my husband. He was the stream that vanished.
I touched my body and grieved the loss of children—my babies—who would never be born, or run in the barley fields, or grow and have children of their own. I would never know the joy of my womb.
I looked up at Naomi, grieving mother of my husband, and of another son who also had succumbed to the fever. She was already weary in the sun and yet we had only begun our journey toward Bethlehem. I surveyed the load on our donkey and then spoke to Naomi. “There is room for you on our beast. I will carry some of the load. Please. You must rest.”
Naomi stared down the road toward Orpah, her other son’s wife. “Your sister-in-law is going back to her people and her gods. Go back with her, Ruth. There is still time to join her.”
I would never go back.
There on the dusty road, I knelt on the ground in front of my husband’s mother and clung to her robes. “Please do not press me to go, to leave you. Where you go I will go, and where you stay I will stay. Your people will be my people and your God my God. Where you die I will die, and there I will be buried. May the Lord deal with me, be it ever so severely, if even death separates you and me.”
I looked up at Naomi. Her eyes appeared as dark as twilight, but the lines drawn on her face by worry and sorrow softened for a moment. She looked down the long road leading to her home and sighed. Was I a burden to her?
For a long moment, I waited for an answer and prayed for favor. I looked up again, and Naomi gave me a slow nod. “So be it, my daughter.” She laid her hand softly on my head.
You will be my mother, Naomi. You will be my home.
“We have little food,” she said. “Some barley bread, dried olives, and figs . . . When I went away, my hands were full; now they are empty.” She stared down at her weathered and callused palms, and sighed again.

I put my own hand in one of hers. “Not empty now. We will face the perils on the road together . . . be it hunger, robbers, wild animals, or weariness.” I rose from the ground and brushed the dust from my tunic and mantle.
The sun had now toiled its way across the sky to the place where it met the earth. The light was no longer oppressive, no longer a threat. I took the donkey’s tether into my hand, and we set off again, side by side, toward Naomi’s homeland.
Awe creased my face, and a timid joy settled in my heart. I remembered that Naomi had spoken of a relative—a man named Boaz—and I wondered what hope he might offer us . . .

The Story from God’s Word
Ruth 1:14-19
Then Orpah kissed her mother-in-law goodbye, but Ruth clung to her.
“Look,” said Naomi, “your sister-in-law is going back to her people and her gods. Go back with her.”
But Ruth replied, “Don’t urge me to leave you or to turn back from you. Where you go I will go, and where you stay I will stay. Your people will be my people and your God my God. Where you die I will die, and there I will be buried. May the Lord deal with me, be it ever so severely, if even death separates you and me.” When Naomi realized that Ruth was determined to go with her, she stopped urging her.
So the two women went on until they came to Bethlehem.

The Story—from Then to Now
Loyalty—it’s a word that’s gone out of vogue in recent years. As our society embraces a more transitory, short-attention, throwaway lifestyle, relationships don’t seem to be as deeply cherished as in earlier years. Concepts such as steadfastness and devotion and fidelity don’t seem to make it into everyday conversation anymore, let alone our lives. In fact, those values seem as old-fashioned as sitting out on the porch to watch the fireflies.
I have a close friend named Brenda—that’s her real name, by the way—who has clung to me for almost twenty years. She has been what Anne of Green Gables called her friend Diana Barry—a bosom friend and kindred spirit. In spite of my occasional lapses in calling Brenda, my failing to have her over for coffee, and my forgetting to pray for her, she remains steadfast.
Brenda has seen me at my worst. Yes, she’s seen the dark side of Anita Higman, and incredibly, she still loves me. Brenda is a dedicated friend like Ruth was to Naomi. She is like the Proverbs 18:24 friend—“one who sticks closer than a brother.” There are rewards for this kind of commitment—it pleases God.
The biblical account of Ruth and Naomi paints a picture of the falling away of the Israelites and their homecoming back into God’s favor. But I especially love the literal story here. Boaz told Ruth how impressed he was with her faithfulness toward Naomi. He even referred to her as noble. Boaz must have thought, if Ruth could be that committed to her mother-in-law, then she would surely be a devoted wife and mother. In the end, Ruth did marry Boaz. And Naomi went from being empty and bitter to having renewed life, and arms filled with her sweet grandson.
I absolutely love this happily-ever-after story.
In fact, Ruth the Moabite is rewarded in another way, since she becomes not only the great-grandmother to Israel’s King David, but she is placed in the lineage of Jesus! This miraculous story all began with a humble concept, but a very powerful and honorable one—loyalty.


~*The Story*~
Questions to Think About

1. One of the themes of the book of Ruth is the deep loyalty and friendship that can form between women. Who are some of the women in your life who have been like beloved sisters to you? What makes these women so special to you?

2. What does it take to make a friendship last a lifetime?

3. What were some of the bonds that held Ruth and Naomi together?

4. How might life have been harder for either one of them if they had gone their separate ways?

5. Do you think these kinds of long-term friendships please God? Why?

6. How do you think people in general view loyalty today?

7. What benefits come from living a life of faithfulness to family and friends?
From Where God Finds You: 40 Devotions Bringing Bible Characters to Life, Anita Higman ~ Standard Publishing Company

***Thank you to author Anita Higman for sending me a copy of Where God Finds You: 40 Devotions Bringing Bible Characters to Life. This review was written in my own words. No other compensation was received.***
Posted by Lane Hill House at 2:01 PM