Now and Then Friends: A Hartley-by-the-Sea Novel by Kate Hewitt, © 2016 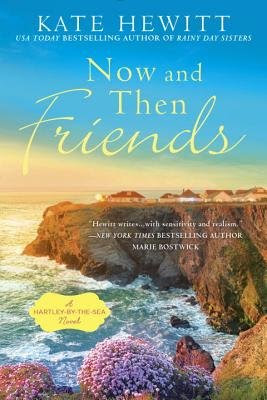 She'd grown up here, walked down this street a thousand times during her five years at the primary school, but it felt unfamiliar to her now. The years at uni, and then in London and Portugal, had separated her from the life she'd once had in Hartley-by-the-Sea. She felt as if she were looking through the wrong end of a kaleidoscope when she recalled her years here.
--Claire, Now and Then Friends, 82

Coming "home" ~ does it ever happen? To truly find where you are is home? Claire West has returned to her childhood home as a respite against all she has known; overcrowding family, a lost relationship that likely never was anyway...
Can relinquished friends be returned? Can offenses be forgiven, however unintentional? Days crowded into days and life moved on once separated. A bused to private school put a hedge between those in the village. Returning to Four Gables she has forgotten, or perhaps never realized, the outcome from those left behind.

Rachel Campbell has her hands full with her cleaning contracts. Caring for her bedridden mother and watching out for her siblings and her hours are pretty occupied. Used to being responsible for her younger sister, Lily, Rachel wants her to succeed at Cumberland Academy, ready for her future schooling at Durham University, seeing to her studies. Cue in sister, Meghan, and her young son, Nathan, adding a mix to the household. Having to "parent" with her dad not in sight for years, Rachel's life has pretty much been sorted out for her. Until coming smack into her earlier days remembrance. Down the beach road and up the steep lane that led to Four Gables, her next cleaning job...Claire West. Memories submerged, long hidden and kept in control, begin to surface.


"If you leave here, no matter for how long, it's not the same as staying," she said as they descended from the coastal path to the beach on the far end of the village. The tide was out, and the beach was a lovely long stretch of wet sand that glimmered under the evening sunlight, the rocks smoothed to shining darkness. Claire breathed in the salty, sea-damp air, every part of her reveling in the purity of the moment.
--Abby, Ibid., 202

Stretching out, making friends, new to Claire, she finds it isn't so awkward as she suspected it would be. Even with Dan, her employer at the Village Shop/Post Office was edging in toward unexplained comfort; an extension of who she could be, emerging.

Now and Then Friends is conversational as daily activity is sorted out in new ventures of trust. The author has brought out lifelong habits changing, bringing newness to those around, placing them in a new response. Seeing lives from different perspectives ~ Claire's, her brother, Andrew; Rachel, her sisters, Meghan and Lily, and their view of their lives intermingle upon the page.


Overview: Now and Then Friends
Childhood best friends Rachel Campbell and Claire West have not only grown up, but after fifteen years, they’ve also grown apart…
After her father left, Rachel had to dedicate her life to managing her household: her two younger sisters, her disabled mother, and her three-year-old nephew. When Rachel’s not struggling to look after all of them, she makes her living cleaning the houses of wealthy families—including the Wests, where a surprise now awaits her. . . .
A lifetime of drifting in other people’s currents has finally left Claire high and dry. First it was her parents, then the popular crowd in school, and finally her fiancé. Now she’s returned to Hartley-by-the-Sea to recover. But running into Rachel brings back memories of past mistakes, and Claire wonders if she now has the courage to make them right.
Soon Claire’s brother, Andrew, asks Rachel to keep an eye on Claire, which is the last thing either woman wants. But as their lives threaten to fall apart, both Claire and Rachel begin to realize what they need most is a friend. The kind of friend they once were to each other, and perhaps can be again. . . .

Kate Hewitt is the USA Today bestselling author of more than forty novels of romance and women’s fiction, including the Emigrants Trilogy, set in Scotland and North America; the Hartley-by-the-Sea series, set in the Lake District; and Tales from Goswell, written as Katharine Swartz. Raised in the United States, she lives in England’s Lake District with her American-born husband and their five children.

***Thank you to author Kate Hewitt for sending me a print copy of Now and Then Friends for review. This review was written in my own words. No other compensation was received.***