Greenwood and Archer: A Novel by Marlene Banks, ©2012

I have read the first two books by Marlene Banks, Ruth's Redemption and Son of a Preacherman, and have looked forward to reading this third book, Greenwood and Archer.

In late May and early June, 1921, a race riot erupted in the Greenwood District of Tulsa, Oklahoma. An estimated three hundred men, women, and children lost their lives, and churches, schools, stores, movie theaters, a hospital, and libraries were among the six hundred businesses destroyed, besides over a thousand homes. These events were depicted in the author's Son of a Preacherman.
The events in Greenwood and Archer take place after Son of a Preacherman, continuing the stories of members of the Matthias and Freeman families, as well as other Tulsa characters.
--A Note to the Reader, author Marlene Banks

Destruction on every side, Billy Ray Matthias joins in rebuilding and encouragement of the people of Greenwood District together, following the riot and burning of the community. He is engaged to the daughter of rancher Earl Freeman. Benny and her brothers, Ethan and Cord, are very close. The two families join for Sunday dinners. Billy Ray's father is Reverend Roman Matthias. Greenwood and Archer is told through the story of these two families and others in the community as they strive to rebuild lives.

The upheavals bring others to add to the peril they are already overcoming. Benny, a school teacher, is visited by her former fiancé who has brought havoc to her life in the past. He is a musician and brings his band with him. One member and Billy Ray know each other. A woman is sent from NAACP, sharing the law office of Ethan, Benny's brother, and a struggle. A Chicago gangster and his mob move in to set up his plan of taking over and making a name for himself. All of them are interwoven into the life of each other through circumstances they are not fully aware of. Lawmen join together to combat what before had separated them. In looking for solutions when they are needing help, they pray and do not push God aside. Throughout it shows what God can do through one person as they are strengthened and gain direction by coming to Him. They do not give up at adversity as they help and support each other.


Isaiah 26:3–4 (ESV)
3  You keep him in perfect peace
whose mind is stayed on you,
because he trusts in you.
4  Trust in the Lord forever,
for the Lord God is an everlasting rock.

Marlene Banks lives in Philadelphia, Pennsylvania. Along with being a prolific writer, she has an Associate of Theology Degree from Rhema Bible Institute in Keysville, Virginia, and is currently studying to initiate a Christian counseling ministry. Marlene has worked thirty plus years in nursing and more than eight years in business. She considers her writing a means of evangelizing and relating Christian principles through fiction.

Ruth's Redemption: In 1820, Bodine Peace is given his freedom and a parcel of land following the Will instructions upon the death of his master. Other freed slaves live on Bo's land. As he can, he buys slaves to set them free after one year of servitude when they receive their freedom papers.

Son of a Preacherman: "A historical romance novel set in the 1920s in Tulsa, Oklahoma, depicting the segregated life of African Americans in Northern Tulsa and the tensions leading up to the Tulsa Race Riots." 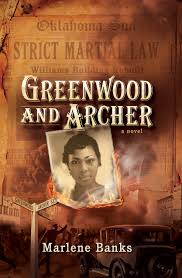 Greenwood and Archer: After the Riot continues the stories of Billy Ray Matthias and Benny Freeman and the residents of the Greenwood District after the historical Tulsa Race Riots of 1921. Though a sequel to Son of a Preacherman, Greenwood and Archer can be read as a stand alone book.

***Thank you to author Marlene Banks for providing me with a copy of Greenwood and Archer: After the Riot to read and review in my own words.***


Prologue and Chapter One, Greenwood and Archer

The scent of smoke lingered in the air even two days after the horrendous riot. Dazed, many people still wandered around, trying to locate loved ones. It was a time of disbelief that such atrocities happened in their community. Being black in Tulsa had never meant first-class citizenship, but until now it never caused such violent victimization. Murder and mayhem had swept through the successful Negro community of Greenwood District with a deadly and destructive fury.
“Why we gotta wear badges?” a black man protested.
“Cause that’s the new law,” the irritated police officer snapped.
“It ain’t right. After all we been through you is tellin’ us we gotta identify who we is? I always been a free, law-abiding citizen, but when they come in our neighborhood terrorizing us and now tell us we under martial law, it ain’t right!”
“Go on and have your employer get you a badge or stay off the streets. That’s the new rule. Now go ahead, boy, before I throw you in jail!” “I ain’t no boy, I’m a man just like you,” he grumbled walking away.

New laws were being put into effect in Tulsa after the riot, not for protecting the victims but to subdue any thought of retaliation against white citizens.
“Curfew! What gives them the right to issue a curfew only on Negroes?” Pastor Scoggins demanded from in front of the pulpit.
“It’s not right!” Reverend Matthias agreed.
“Is it just in the city, or does the county have a curfew too?” Reverend Metcalf asked, troubled.
“They told me my taxis have to be off the street by eight at night,” L. D. Johnson said. “That shorts my money to make a decent living. I make a lot of my big fares after dark, and they know it.”
“They don’t care about you making a living. They want us to all go broke,” H. T. Wilson declared.
“What is the NAACP doing about this?” Reverend Matthias asked, turning to Ethan Freeman.
“It’s just in the township limits so far, but I think they’ll soon change it to include the counties,” Ethan said.
“This is the last straw,” Reverend R. A. Whitaker declared as he stood up. “I’m sick of them harassing us when we’re the injured party.” The preacher stepped out into the aisle. “They burned down Mt. Zion Baptist Church because we dared to prepare to protect ourselves and fight back. They murdered innocent human beings and destroyed blocks of valuable property. Then they try to blame us for the riot. I’m sick of their twisting the facts.”
“Enough is enough,” Mr. French said from the rear of the church. The house was full for this covert meeting. The law was cracking down on every move made in Greenwood District. Police patrolled the area, stopping and questioning its citizens at random. What should have been police protection for the residents of Greenwood District became police persecution.
“I can’t find my sister,” Georgia Logan said. “They took her out the house, I’m told, and then burned the house down. I can’t find where they took her. She’s sick and in a wheelchair.”
“We’ll help search the hospital and the Red Cross with you,” an older woman volunteered.
“I already did and she’s not there.” Tears pooled in Georgia’s eyes.
“Maybe someone took her in,” Mrs. French suggested.
“I need help feeding the survivors and finding them shelter,” Reverend Metcalf announced.
You can use this church if you need to, Reverend,” Pastor Scoggins offered.
Clara Hydecker started crying. “They murdered my poor Sam for nothing! What are we going to do? My husband is dead, we have no home and no food, and everything we owned was burned with our house. I have no money and I have four children to feed!”
A young man called out, “Yeah, what are we going to do? The law isn’t on our side. What are we going to do?”
Billy Ray Matthias stood up. “We’re going to find food and feed as many people as we can. Then we’ll set up temporary shelter as best we can, tents if we have to for the time being. Then we organize a rebuilding plan. What we don’t do is give up. We don’t accept defeat, because that is exactly what they want.”
“Yeah, we can rebuild this neighborhood even better than before if we try,” Vic Brown shouted.
“Easy for you to say since your house ain’t burned to the ground,” Manny Griswold muttered.
Billy Ray walked to the front of the sanctuary his imposing figure matched only by what he said. “The people of Greenwood District cannot give up. We have to get to work helping each other and rebuilding what was destroyed, but before we worry about any of that . . . we need to pray.”

The race riot of May 31 and June 1, 1921, had turned a once thriving entrepreneurial community into a bloody battlefield. Hatred and terror reigned throughout the evening and into the wee hours of the night. To the beleaguered residents of Greenwood District, morning’s dawn unveiled the full horror of lost lives and property destruction.
Thirteen months after the racially motivated riot, Greenwood District still evidenced the assault on its citizens and destruction to its infrastructure. The rebuilding process was under way but would never fully heal the scars of that fateful evening. Gradual development was being made to restore demolished businesses and homes. It was not an easy task, but one that would be completed. The spirit of Greenwood would not tolerate eradication by those consumed with violent intent.
Prayers were continually being offered for the people and the neighborhood from Christ-loving citizens of Tulsa, black and white, and across the country as well. Greenwood District would not remain a hollowed-out shell of a community but be raised from the dead by the hand and will of God.