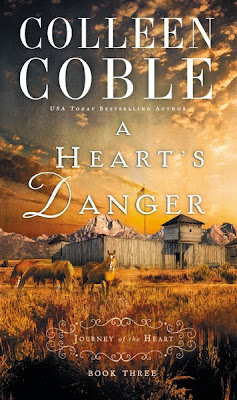 Part 3 of 6 in the Journey of the Heart series ~

I've been so excited to hear from those of you who are reading the Journey of the Heart series. I started writing when my younger brother Randy was killed in a freak lighting accident when I was 38. Writing was my solace and part of the grieving process. Thomas Nelson has taken my first two books and after editing and revisions, has turned them into a serialization with six parts. Readers are loving it so far which makes me so happy because it's really a tribute to Randy. Even the main character is named Rand. The third installment, A Heart's Danger, is out May 5, 2015. Look for it at Walmart, Sam's, or anywhere else books are sold. I'm so excited Sam's and Walmart are carrying inspirational stories like mine! I'd love to see a picture if you find one at your local store! http://colleencoble.com/books/journey/
--author Colleen Coble

Book 3, A Heart's Danger: On the brink of war with the Sioux, Sarah risks everything to expose the betrayal threatening the man she loves.

My review:
This six-part novella series is a reissue of the Wyoming series, earlier works by Colleen Coble ~ Where Leads the Heart and continuing Plains of Promise, to be enjoyed by new readers and renewed by those who read them when they were first published almost a decade ago. The story continues as winter is upon Fort Laramie bringing a scarcity of food and supplies.

Early March 1866
Fur trader Ben Croftner has intermingled his quest of foiled plans between "his" intended, Sarah Montgomery, and her long-time interest, Lieutenant Rand Campbell. She has made it quite plain that she doesn't desire a relationship with Ben with his lies and underhanded schemes. Even if hopes don't work out with Rand, Sarah will not settle.

Upheaval at Fort Laramie continues as the tribes leave the grounds to continue to open lands. Rand Campbell's fiancée, Jessica DuBois, is revealed as she joins with Ben Croftner to produce plans sure to remove any interest Rand may have remaining for Sarah. Deceit has a way of turning on itself. (to be continued in next month's issue...)


***Thank you to Litfuse Publicity Group for inviting me to join the blog tours for the Journey of the Heart series by Colleen Coble, and to Thomas Nelson Publishers for sending me a copy of Book Three, A Heart's Danger for review. This review was written in my own words. No other compensation was received.***

Sarah risks everything to expose the betrayal threatening the man she loves—but will the risk be worth it? Find out in book three, A Heart's Danger, of Colleen Coble's A Journey of the Heart series. Rand’s new fiancée wants to keep him from returning to Sarah Montgomery . . . for whom his heart clearly still yearns. Sarah just wants to move on with her life at Fort Laramie, but doing so under the watchful eyes of both Campbell—the man whose love she craves—and Croftner—the man whose lies have cost her everything.

Enter to win the perfect pairing giveaway: three books (books one–three in Colleen's A Journey of the Heart series) and coffee to pair with your new book!

One grand prize winner will receive:
Enter today by clicking the icon below. But hurry, the giveaway ends on May 31st. Winner will be announced June 1st on Colleen's website.