First, the boarder in the adjacent room at the boardinghouse may wish he hadn't been eavesdropping on the two girls through the thin walls. He may just decide he needs a closer inspection of this New Woman. Reeve Wilder may think he is innocently gathering information for his New York World newspaper articles, until Flossie Jayne sideswipes him.

Yes, these are our two protagonists ~ Reeve and Flossie ~ our main two contenders with many interesting characters woven within their adventures. Newly discovered letters, a decade ago only, revealed an actual person in this time period that the story is written about. That is exciting!

What would it have been like to being used to having your daughters home until they married, having them tell you they were going off on their own? And to a nondescript New York City boardinghouse where who knows who lived there? No chaperone? Working in a man's job?

As you have read above, Flossie has indeed done just that. She is a new Tiffany Girl at Tiffany Glass and Decorating Company, New York City, in the Women's Glass Cutting Department. She also has a great plan for her new job restocking in the storeroom ~ sorting the hues of the colored glass. I thought it was a great idea. She could have a rainbow-filled trunk of those that didn't exactly fit in with the others. Her idea was shot down ~ too time consuming; hmm. We'll see.

A challenge getting to and from work amid working men's views of women taking men's jobs and not being back at hearth and home.

Question: Do you sit in the same place ~ at church, at family gathering dinners?
There is change ahead for Klausmeyer's Boardinghouse, as Flossie puts name place cards on the dinner table to acquaint residents beyond their "I always sit there." Being an only child, Flossie was looking forward to mingling with her now "big family." So... she is going to have to bring it about, in her creativity.

An immediate notice upon receiving Tiffany Girl was the length ~ 512 pages. Love it! And each period photo included. I like the fullness of the character descriptions to their very thoughts and feelings revealed through questions and reflections afterwards of the get-to-know-you questions shared during dinner. The selection of each one, pausing and reflecting on answers ~ and the depths of them, so researched as to draw each one in and aware of their attributes and caring. Their thought-out responses revealing their heart and very precious memories hidden away until gently escaping into fullness.

You will enjoy being fully emerged in their every day, wanting to visit them again. Another thing I like is the mention of current news of the times in the newspaper. So many good things ~ learning to trust another, feeling free to reveal yourself. So smoothly written as they converse among themselves. 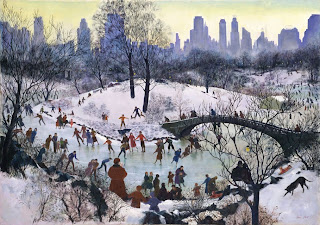 In Central Park, a red ball was hoisted on a tower that could be seen from a considerable distance around to signify that the ice was safe for skating that day. For those who were too frail or timid to try on skates, there were even chairs on runners in which they could sit and be pushed around by another skater. Source

Thank you, Deeanne Gist, for a beautiful story worthy of capturing their endearing inner hearts.

To the readers, there is so much for you to discover as you read this story; so beautifully written with expression. The days at Tiffany & Co; the display at the World's Fair, the coming to terms with keeping one's self apart from others. You will love the journey. Deeanne Gist has brought to life each part of the story. The years incorporated, 1892-1893, could be any year with downfalls in economy and learning to communicate with others. This is a valuable story of giving and caring about others, of working together and being thankful. More than a fictional story, it will touch your heart.


~*~
From the bestselling author of It Happened at the Fair and Fair Play comes a compelling historical novel about a progressive “New Woman”—the girl behind Tiffany’s chapel—and the love that threatens it all.


In 1893 Louis Comfort Tiffany exhibited a chapel interior at the World’s Columbian Exposition in Chicago that brought him international acclaim few American artists enjoyed at the time. The chapel interior was installed in the Tiffany & Co. (the jewelry firm founded by his father) pavilion in the Manufactures and Liberal Arts Building.

Below is the Manufactures and Liberal Arts Building, the largest building in the world at that time: 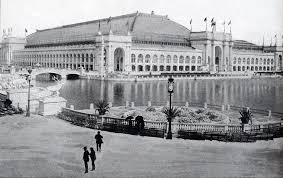 Papa gave her a placating smile. “All the great artists are men, my dear. That’s just the way things are. The sooner you accept that, the better. I don’t know if it’s the art school who’s putting these ideas into your head or if it is some half-formed aspiration thrilling upon your nerves that is to blame, but you must stop with these foolish notions.”
Rearranging the spoon beside her pudding cup, Flossie lined it up perfectly straight. “Mr. Louis Comfort Tiffany came to the art studio today. Because of a strike, he’s lost his glaziers and glassworkers. He needs someone to help him finish making stained-glass windows for his exhibit at the World’s Columbian Exposition. He offered me and five other girls the men’s jobs.”
“I’m sure you told him no.” Papa wiped his mouth with the napkin hanging from his collar. “Wonderful dessert, my dear. Simply wonderful.”
“I accepted the position. I start January second.”
He gave her a look of loving tolerance. “You will write him a very nice note then, thanking him, but telling him you are needed at home.”
“I’m moving out.”
Removing his napkin, he pushed back his chair. “Do not test me anymore, Flossie. You will not move out of this house until you are good and wed. And you will not take a job, ever.”
“I am taking this job, Papa. You can go to the races on it. I will leave as soon as I can secure a room in a boardinghouse.”
He’d narrowed his eyes at the word “races,” but it was the word “boardinghouse” that sent him completely over the edge.
“A boardinghouse?” He gripped the table and leaned forward. “No daughter of mine will hold a job, nor will she live in a boardinghouse.” He spewed the last word out as if it were Hades itself.
She set her jaw. “I’m sorry, but my mind is made up.”
She didn’t know how she’d do it, though. The other girls at the Art School of Applied Design already lived in houses without any vacancies or were going to stay at home, but the more Flossie thought about a boardinghouse, the more excited she became about it. She’d have no one to answer to. No one. Not her father. Not her mother. Not even a husband. She wouldn’t just be a New Woman, she’d be a whole new person.

Author Deeanne Gist has rocketed up bestseller lists and captured readers everywhere with her very fun, very original historical novels. A favorite among readers and reviewers alike, her popular 1893 Chicago World's Fair titles include It Happened at the Fair and Fair Play. She has won the National Readers' Choice Award, Booksellers' Best Award, USA Best Books Award, and stellar reviews. With a background in education and journalism, Deeanne has written for People, Parents, and Parenting magazines. Visit her online at IWantHerBook.com and at Facebook.com/DeesFriends.

***Thank you to author Deeanne Gist for inviting me to review her newest novel, Tiffany Girl. You will love it! Remember the pictures with a caption beneath in the Nancy Drew books? Tiffany Girl has them too! This review was written in my own words. No other compensation was received.***