Choices of the Heart by Laurie Alice Eakes, ©2013

Set in 1840’s Appalachia, meet Esther Cherrett who runs away from her training as a midwife to avoid scandal. Instead she is caught up in the middle of a bitter family feud. This is book 3 in The Midwives series, but can be enjoyed as a stand-alone.


Choices of the Heart
The Midwives, Book 3


She thought she had left her old life behind . . . 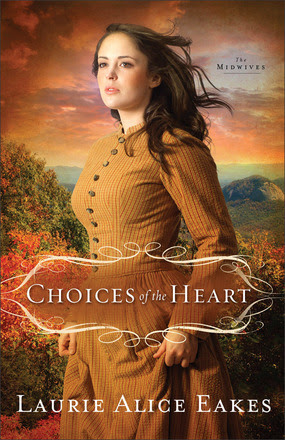 Esther Cherrett comes from a proud line of midwives and was trained by her mother to take over the family calling. But when a terrible scandal threatens all she holds dear, Esther flees, taking a position as a teacher in the wild western mountains of Virginia. But instead of the refuge she was seeking, Esther finds herself in the midst of a deadly family feud—and courted by two men on opposite sides of the conflict. All she wants is to run away again.

But could it be that her past holds the key to reconciliation—and love?

In this gripping story of trust, deception, and bittersweet loss, you’ll discover the true meaning of choices of the heart.

At least, Esther Phoebe Cherrett will be in Seabourne, her home, for a few hours more. She has accepted a position as teacher at Brooks Ridge, many days away from her home in the East. She travels on horseback with cousins from two opposing families. Siblings Griff and Bethann Tolliver, and Zach Brooks and his sister Hannah Gosnoll, have come to guide her higher to their Appalachian Mountains. Opposing, if you will, because of past wrongs that never seem to come to a close. Cousins Zach Brooks and Griff Tolliver have vowed before the itinerant preacher that they, as the oldest, will strive to stop the warring and bring, no ensure peace, between the families. But will it stop? The suspicion, the watchfulness?


"Our father's people were here first," Zach explained.
He already had said so along the way. His mother and Griff's mother were sisters whose families had resided in the mountains since the Revolution. The Tollivers were relative newcomers, having only been in Virginia's mountains for the past forty years or so. "They've been in America forever, though," Hannah had admitted reluctantly. "Maybe lived around your people once."
--Choices of the Heart, 68-69

And Esther... how is she going to fit in? Her speech, however coveted, is different. She is to educate the children because of a strain of ore now being mined from the earth. Taught to read and write so they are not swindled in the future. What would it be like to come into a new area where, because of your skills at automatic doctoring ~ seeing a need and applying what you know ~ misplaces another's worth and recognition as their life trade? Your ways different, "more modern," unknown to those you have come to serve? Esther has a lot of learnin' of her own to come by. Not trying to make things right, that hamper instead?

But Esther Cherrett has arrived, and is offered a two-room wooden structure with glass windows and quilts hanging on the wall. Esther's room and schoolhouse ~ prepared just for her; does she think everyone lives this way? Set apart in reverence, keeping her from melding in. The set apart is to protect her. Wise woman, Mrs. Lizbeth Tolliver is. Besides teaching, it is expected that Esther will become the refined bride of one of the cousins to bring some culture into their lineage. The cousins have already informed her along the way.

Esther has already put a snag in the deciding. She has set God apart, questioned His authority and leading. This has put her at odds with one of the cousins, unknowingly. He is hoping she will keep it to herself and not indoctrinate the children in her way of thinking, but teach from the Word of God direct.

Laurie Alice Eakes' writings are so fluid. You are walking each footstep with them. As Esther tries to run to begin anew, she finds her tendencies lean to serving in what she knows. She is open and giving by nature; wrapped up by fear and unsteadiness from what she has left behind. Choices of the heart.


Queasiness gripped Zach's stomach. He feared his sister was right. Females who looked and talked like Esther Cherrett and came from the kind of family she did didn't go to the mountains for work or husbands. Yet Miss Esther Cherrett, with her English father and American mother living in a quiet fishing village on the eastern shore, had answered an advertisement for a schoolma'am there in the Virginia mountains.
Not for the first time, he questioned her honesty. She might be telling them the truth about most things. She was certainly good enough for the work they wanted from her--to teach the youngsters good English and reading and writing so they could be more than men and women trying to eke a living out of the unforgiving rock of these hills. But Esther was too pretty, too comfortably off, too confident in herself, to truly belong amidst the mountain folk. She was more like those people who had come to ask questions and watch them, write in little books, then go away and print things they thought were true, like they were writing about some new breed of animal. And she was a bit old to not be wed, especially as pretty as she was.
--Ibid, 77

Laurie Alice Eakes is the author of Lady in the Mist, Heart's Safe Passage, A Necessary Deception, A Flight of Fancy, and several other novels. She won a National Readers Choice Award for Best Regency in 2007 for Family Guardian. Laurie Alice writes full-time from her home in Texas, where she lives with her husband and sundry dogs and cats.

Revell, a division of Baker Publishing Group, offers practical books that bring the Christian faith to everyday life. They publish resources from a variety of well-known brands and authors, including their partnership with MOPS (Mothers of Preschoolers) and Hungry Planet.

Choices of the Heart: Available January 2013 at your favorite bookseller from Revell, a division of Baker Publishing Group.


*** Thank you to Revell Blog Tour Network Historical Fiction for inviting me to be a part of this tour and sending me a copy of Laurie Alice Eakes' Choices of the Heart to review in my own words. ***
Posted by Lane Hill House at 1:08 AM