Lysa TerKeurst admits that she, like most women, has experiences where others bump into her happy and she comes emotionally unglued. We stuff, we explode, or react somewhere in between.
What do we do with these raw emotions? Is it really possible to make emotions work for us instead of against us? Yes, and in her usual inspiring and practical way, Lysa will show you how. 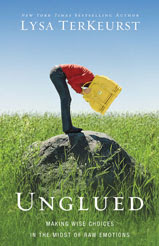 Filled with personal examples and Biblical teaching, Unglued will equip you to:

* Know with confidence how to resolve conflict in your important relationships.
* Find peace in your most difficult relationships as you learn to be honest but kind when offended.
* Identify what type of reactor you are and how to significantly improve your communication.
* Respond with no regrets by managing your tendencies to stuff, explode or react somewhere in between.
* Gain a deep sense of calm by responding.


Day 41
The Underbelly
"This will result in your being witnesses to them.
But make up your mind not to worry beforehand
how you will defend yourselves. For I will give you
words and wisdom that none of your adversaries
will be able to resist or contradict."
(LUKE 21:13-15)

Thought for the Day: "Criticism may not be agreeable, but it is
necessary. It fulfills the same function as pain in the human body. It
calls attention to an unhealthy state of things."
--WINSTON CHURCHILL

Criticism stinks. That's usually my first thought when someone makes it clear they don't like something I've done or said.
My pride says, "How dare you!"
My heart says, "I want a chance to explain."
My soul says, "Jesus, am I off base?"
My mind says, "Why do I open myself up like this?"
My feelings say, "Ouch."

Sometimes criticism is fair. Maybe I messed up and it would serve me well to reconsider. Other times criticism is nothing but rotten spew. And boy, does it stink. But if I get stuck in the stink, it serves no good purpose.
Might there be another way to look at harsh criticism? To get past the hurt to see if it has an underbelly I should consider?
The other day I Googled the word underbelly and stumbled on an article about the armadillo lizard. This fascinating creature has hard and pointy scales that have "Don't mess with me" written all over them. But, like all tough creatures, this lizard has a vulnerable place.
The armadillo lizard's tough exterior wraps around its back but softens at the underbelly. When threatened, the lizard grabs its tail and displays a prickly, intimidating posture to keep other creatures away. At this point, the rest of its body serves only one purpose--to hide and protect its most vulnerable part.
So what does a strange desert creature have to do with criticism?
In an effort to protect my underbelly, I sometimes get all wrapped up in myself and tragically forget the underbelly of my critic--the place they are vulnerable and the things they might be hiding and protecting beneath the harsh words and prickly exterior. This is a place they may never let me see. It's the storage place for their hurts and disappointments. It holds the root cause of their skepticism and the anger that probably has very little to do with me. Remember, "the mouth speaks what the heart is full of" (Matthew 12:34). And from the overflow of their underbelly, they spewed.
If I forget the other person's underbelly, I am tempted to start storing up my own hurt, skepticism, anger, and disappointments. If I remember this underbelly, I have a much greater chance to keep it all in perspective. I can let my reaction be a good example to this other person just as Luke 21:13-15 reminds us: "This will result in you being witnesses to them. But make up your mind not to worry beforehand how you will defend yourselves. For I will give you words and wisdom that none of your adversaries will be able to resist or contradict." Yes, I must make up my mind not to worry about defending myself. Then I uncoil. And I see the opportunity to witness.

Dear Lord, thank You for this challenge to think about the
other person's underbelly before I react to criticism. I know it's
a simple step, but it's so hard to live out. Help me to put this
truth into practice and to walk in the wisdom You have already
given. In Jesus' name. Amen. 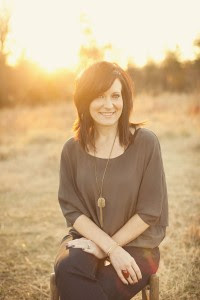 Lysa TerKeurst is a New York Times bestselling author and speaker who helps everyday women live an adventure of faith through following Jesus Christ. As president of Proverbs 31 Ministries, Lysa has led thousands to make their walk with God an invigorating journey. For over 15 years, her message has enabled women to:

Make the Bible come alive whenever you read it.
Discover how to develop inner peace and security in any situation.
Replace doubt, regret, and envy with truth, confidence, and praise.
Stop unhealthy cycles of striving and learn to love who you are.
Sense God responding to your prayers.

Lysa’s personal adventure of following God captured national media attention when she and her husband adopted two teenage boys from a war-torn orphanage in Liberia, Africa. They never imagined their decision would start a chain reaction within their community, which inspired other families to adopt over 45 children from the same orphanage! Lysa’s amazing story led to appearances on The Oprah Winfrey Show, Good Morning America, The 700 Club, USA Today newspaper, Woman’s Day magazine, and Focus on the Family radio.

Today, Lysa and her ministry team at Proverbs 31 encourage 500,000 women through their daily online devotional. In addition, she co-hosts a 1-minute inspirational radio program aired on more than 1,200 stations around the world. Lysa’s blog averages over 80,000 avid readers per month. Plus, she touches hearts through their monthly magazine, P31 Woman.

Lysa is the New York Times bestselling author of 16 books, her most recent releases, Made to Crave and Unglued, have remained on the best sellers list for over 40 weeks combined. 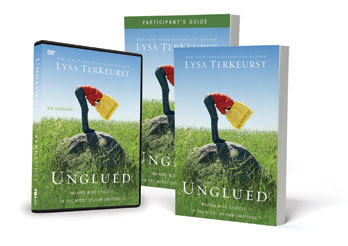 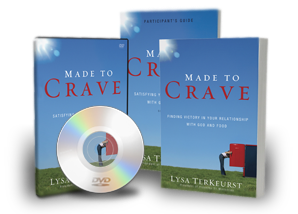 *** Thank you to Zondervan's Linked to Lit for providing me a copy of Unglued Devotional: 60 Days of Imperfect Progress to review. No other compensation was received. ***
Posted by Lane Hill House at 1:09 AM