The Heiress of Winterwood by Sarah E. Ladd, ©2012 ~ Book #1 in the Whispers on the Moors series 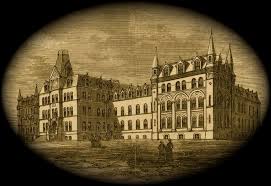 Crisp and clear, I really like the typeset of this novel on the creme-colored paper. It is very readable and stands out for the setting of the time period. I like the flow of it. Also, the Regency speech!


With the sweep of her primrose muslin skirt, she quitted the room.
--The Heiress of Winterwood, 8

Captain Graham Sterling is a naval captain who is fighting in the War of 1812. Late in his wife Katherine's pregnancy he receives word, and months later of her death in childbirth. His daughter Lucy is in the care of Amelia Barrett and is now 9-months-old. His ship has been damaged in battle. Captain Sterling comes to Eastmore Hall, the inherited home of his elder brother William. Amelia's home, Winterwood Manor, is the estate adjoining the Sterling property. Her uncle and aunt, George and Augusta Barrett have remained with their daughter Helena, as guardian to her and to the estate after the death of Amelia's father, twelve years past.

Amelia had befriended Katherine Sterling and pledged to her on her deathbed that she would hand-deliver her final letter to her husband, and care for their newborn daughter. Upon hearing of his arrival, Amelia sends word to Eastmore Hall for Captain Sterling to come to Winterwood Manor to speak with her. Through difficult circumstances, she hopes they may determine together the best care for Lucy. To retain Winterwood Manor, Amelia must marry before her 24th birthday in five weeks, or her inheritance will be forfeited and passed to a distant cousin. She proposes their marriage as the solution; he declines.

Graham Sterling has put up guarded walls. Amelia has tried to keep in control of what she would like to happen. Will they yield to the One who has the best for them? As they open their hearts, they find who they really are.


"Trust in the Lord with all thine heart; and lean not unto thine own understanding. In all thy ways acknowledge Him, and He shall direct thy paths."
--Psalm 3:5-6

I like the extreme loyalty of the staff at Winterwood Manor. They carry on amid the confusion of those seemingly in charge. Amid the strife and clamor, daily needs are seen to and little Lucy is cared for. This novel is very well-written, concise and riveting as the daily happenings are portrayed in the lives of these families.

Thank you to Litfuse Publicity Group for sending me an Advance Reader's Copy of The Heiress of Winterwood to read and review. No other compensation was received.

Sarah Ladd is celebrating the release of The Heiress of Winterwood with a Downton Abbey Kindle Prize Pack Giveaway!

One winner will receive:
Enter today by clicking one of the icons below. But hurry, the giveaway ends on April 30th. Winner will be announced on 5/2/13 {HERE}.