The Courting Campaign by Regina Scott, ©2013

***Special thanks to Regina Scott for sending me a review copy.***

Regina Scott has spent fifteen years in the Regency period, writing books that call readers to believe in possibilities. The Courting Campaign is her twenty-fifth published story. She currently writes for Love Inspired Historical. You can find her online at www.reginascott.com, blogging at www.nineteenteen.blogspot.com, or on Facebook at www.facebook.com/authorreginascott. 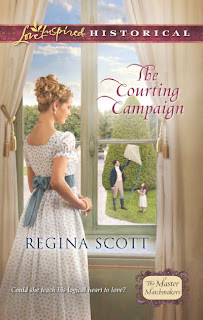 Emma Pyrmont has no designs on handsome Sir Nicholas Rotherford--at least not for herself. As his daughter's nanny, she sees how lonely little Alice has been. With the cook's help, Emma shows the workaholic scientist just what Alice needs. But making Nicholas a better father makes Emma wish her painful past didn't mar her own marriage chances.

Ever since scandal destroyed his career, Nicholas has devoted himself to his new invention. Now his daughter's sweet, quick-witted nanny is proving an unexpected distraction. All evidence suggests that happiness is within reach--if only a man of logic can trust in the deductions of his own heart.

Emma Pyrmont has escaped servanthood in her own home in London to travel to the English countryside to take a position as nanny to a little girl. Alice Rotherford's mother died when she was an infant and Emma desires relationship for this little girl, neither of them previously received. Emma seeks to draw Alice's father to become aware of his daughter. In the three months that Emma has been Alice's nanny, he has not visited the nursery. As an inventor, Sir Nicholas Rotherford, knighted for his contribution, spends time in his laboratory almost exclusively. Slowly, Emma invites him into Alice's activities. Unable to miss what you haven't had, Sir Nicholas begins to include his daughter and Emma into his days.

Emma is acutely aware of Alice's needs because of the deficit in her own. Alice has transferred her emotions exclusively to her doll. She begins to look forward to seeing her Papa. They both are becoming alive. And, Emma? She is avoiding revealing her own past, to keep it from colliding with her present.

What I especially liked was how she asked cook what his favorite childhood pastimes were so she can recreate them in his daughter's with something he enjoys too. With the uncertainties of her days, Emma is giving and caring beyond herself. You want the best for her; not exposed to ill-treatment.


All that the Father gives me will come to me,
and whoever comes to me I will never drive away.
--John 6:37

Sir Nicholas has traveled the same path as Emma. With his wealth set aside, he remembers days set apart as well. With his past accused failures, he too is wanting to distance himself from those who have pulled away from him. They may have more in common than they realize.


The Grange, near the Peak District, Derbyshire, England