Whispers from the Shadows by Roseanna M. White, ©2013

Roseanna M. White is the author of several novels, as well as the senior reviewer at the Christian Review of Books, which she and her husband founded, and the senior editor at WhiteFire Publishing. 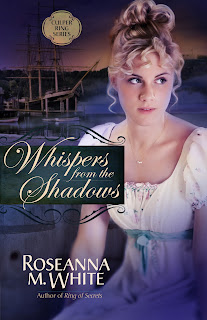 When Gwyneth Fairchild flees London to save her life, she ends up under the care of Thaddeus Lane in Baltimore. Though their hearts turn to each other, Gwyn and Thad are on opposite sides of the War of 1812. What is God’s plan for them when the war is over?


Ye were sometimes darkness, but
now are ye light in the Lord:
walk as children of light...
See then that ye walk circumspectly,
not as fools, but as wise,
redeeming the time, because the days are evil.
--Ephesians 5:8, 15-16

Spring, 1814. Gwyneth Fairchild hastily leaves her home in England to venture across the ocean to America with the accompaniment of Mr. and Mrs. Wesley. She is overcome with turmoil within and without as the passage continues, and seems not to cease as she arrives at the Lanes where her father has dispatched her.

Captain Thaddeus Lane, unknown to Gwyneth, is unaware of their impending arrival. His parents are moving into his home as she and the Wesleys arrive. His sister, Philly, his friend, Arnaud with his son, Jack, age four, are frequently present within the lively home. She is welcomed by Thad or Captain, as he wishes her to call him, and his family. His parents remember her from visits when she was a little girl, the age of Jack. Thad visited her family's home some fifteen years earlier and vaguely remembers her. The household settles into a somewhat normal routine; except for her insomnia and anguished thoughts that keep her from fully participating. 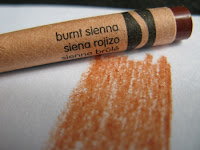 Her one gifting so vital to her now is her drawings. Her artistic ability that does not lie and clears her mind much like words on a page written in a journal to express herself. One color she uses brought my childhood favorite crayola to mind: burnt sienna. How I loved the richness of it for tree trunks and accents. This faint scribbling of it, does not do it justice. It is a firm solid color that comes alive!

Gwyneth's mother's brother, her uncle Gates, and her betrothed, Sir Arthur Hart, are seeking her whereabouts. The turmoil of war and its uncertainties do not always bring out the best in people.

You will want to check out these other writings in this series!