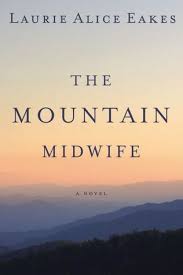 Brooks Ridge ~ Appalachia
Southwest Virginia
Another wonderful story by Laurie Alice Eakes. I so enjoy her stories so tightly knit together that you will not want to put it down until you have finished. The Mountain Midwife will have you holding on from the very beginning as midwife Ashley Tolliver has a late night visitor ~ a young pregnant woman she has not seen before ~ ready to deliver. Trying to stanch the bleeding following delivery of her baby, Ashley calls the local hospital on her cell phone to tell them to expect them soon. But as the youth are leaving, they take off, chased by a large black truck in pursuit.

~*~
Great Falls
Northern Virginia
Hunter McDermott's face is plastered all over the television news. Before returning from business in Portugal, he rescues a young child from running out in traffic as her family is close behind him. From this simple action, they are diverted from an explosion of a car bomb. From this media exposure, he receives a phone call from a woman, unknown to him, who claims to be his mother. Her last name is Brooks.

Thus begins an adventure that will change the focus of his life and that of nurse-midwife Ashley Tolliver as they unravel the daily happenings that bring them together. Ashley has plans to attend medical school to become a doctor as her two brothers, returning to Brooks Ridge to have expanded knowledge to further be of help to the people who trust her. Hunter finds his beginnings are different than what he thought.

I was so involved in Ashley's service to her patients and connection with her friends; loyal and putting them before herself, she brings comfort and stability to those near her. She is trustworthy and compassionate; steadfast in purpose. Over two hundred years, women in her family line had been trained as midwives. One such woman she is named after, as Ashley Esther Tolliver, is Esther, you may have read about in the third book in the Midwives series, Choices of the Heart.

Enjoy this excerpt from The Mountain Midwife ~ Chapter 1


***Thank you to author Laurie Alice Eakes for sending me a print copy of The Mountain Midwife for review. This review was written in my own words. No other compensation was received.***
Posted by Lane Hill House at 12:26 AM