Beyond These Hills by Sandra Robbins, ©2013

***Special thanks to author Sandra Robbins and to Ginger Chen at Harvest House Publishers for sending me a review copy.***

Sandra Robbins and her husband live in the small college town in Tennessee where she grew up. They count their four children and five grandchildren as the greatest blessings in their lives. Her published books include stories in historical romance and romantic suspense. When not writing or spending time with her family, Sandra enjoys reading, collecting flow blue china, and playing the piano. 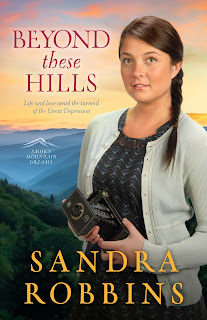 In the romantic conclusion to the Smoky Mountain Dreams series, Sandra Robbins tells a story of love and loss. The government is purchasing property to establish the Great Smoky Mountains National Park, and Laurel Jackson fears she’ll have to say goodbye to the only home she’s ever known. Can she find the strength to leave?

Beyond These Hills is book 3 in the Smoky Mountain Dreams series and I was eager to find out what happens after reading the first two books in the series. Angel of the Cove is the story of how Laurel's grandparents met and Mountain Homecoming is Laurel's parents' story. Beyond These Hills is now Laurel's story. These three generation stories may be read as stand-alones but you will want to meet the families of Cades Cove, Tennessee.


He glanced once more at the pickup truck that still sat in front of the store and pictured how Laurel had looked standing there. When he'd grasped her hand, he'd had the strange feeling that he'd known her all his life. How could a mountain girl he'd just met have such a strange effect on him?
--Beyond These Hills, 17

Mountain Laurel... I have just arrived in Gatlinburg. How can one meeting change all I stand for ~ Andrew Brady, single, single-minded, here to gain the few properties not surrendered to the Park Service. Just meeting, she remembers my name as she talks to the proprietor. I have helped her taking her mother's pottery crates in from the back of the truck ~ Mountain Laurel Pottery ~ Laurel. We only said our first names... 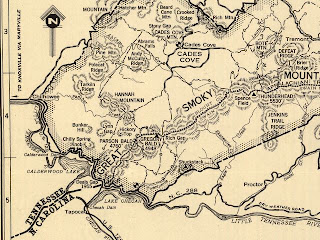 When I check into the hotel there is a message for me from the new superintendent of the park that I am to meet him in the dining room for the evening meal. He has just returned from visiting the park sites. I will be going out to the CCC camp to stay while I am at Cades Cove. It is the Civilian Conservation Corps. Mr. Eakin suggests I go early to meet the preacher and his son-in-law who have part of the land I am coming to encourage the owners to resign to the park development. As I am walking into church I am queasy about attending. As I back up and turn, I come face to face with... Laurel! She invites me to sit with her family as I am visiting. Laurel introduces me to her grandfather and her father ~ by name, the very people I have come to meet. Laurel's family is part of the twenty-four remaining families I am to talk to about selling their land! They misunderstand about my going to the CCC camp. I am going to be staying there but not working with the men on work crews. (The sermon you ask? It is about Judas and the thirty pieces of silver.) Laurel's grandparents invite me home with them to dinner and I tell them they may not want me to come if they knew why I was at church today. I tell them and they invite me anyway, saying we can talk today after the meal, both he and Laurel's father together, instead of waiting until tomorrow. I am to follow Laurel's father to Reverend Martin's home. Mr. Jackson tells me we are getting acquainted today, not talking business until the work week. I am relieved, but uncertain how Laurel and I can become friends. She hasn't taken too kindly to the revelation of my appointment in the Cove. After dinner I explain to her I couldn't have come and misled her family. That there wasn't time to tell her while being introduced to everyone. She leaves me standing on the porch.

I am invited for a trail walk at Gregory's Bald. Come along as I venture among these hills.